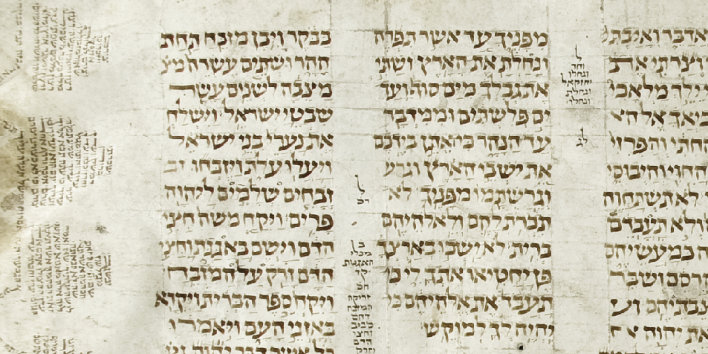 Originally a bundle of 17 manuscripts belonging to the medieval community of Erfurt ended up in the hands of the Erfurt Council during the plague pogrom in 1349 and is called “Erfurt Collection”. The valuable manuscripts were shut away until the second half of the 17th century in the Erfurt Council Library, and then appeared in the inventory of the library of the Evangelical Ministry in the Augustinian Monastery, from where they were sold to the Royal Library in Berlin for conservation reasons. The manuscripts consist of:

The Erfurt Manuscripts also include an Arab Hadith Manuscript (Erfurt 16), which however was added later to the collection, and two manuscripts (Erfurt 5 and 11), which were sold to private libraries.

Despite the cultural importance of the “Erfurt Collection” there have been very few recent research studies on the manuscripts using new scientific methods. As the following research report will show, so far no attempt has been undertaken to view the manuscripts as a whole in relation to the other artefacts of the medieval Jewish community. Consequently no contextual analysis has been undertaken. The few individual studies on the manuscripts are mainly from the 18th and 19th centuries and deal almost exclusively with the Hebrew Bible manuscripts of the collection; with the interpretations of the Bible texts, the philological characteristics of the Aramaic targumim and the variants of the Masoretic commentary being the main areas of interest.

The start was made in 1680 by the Augsburg preacher and Orientalist Matthias Friedrich Beck, who produced a Latin translation with commentary of the Aramaic Targum Onkelos for the Books of Chronicles based on the two-volume Erfurt Manuscript (Erfurt 1). Then in 1706 the dissertation of Abraham Kall was printed, which dealt with the Bible manuscripts of the collection on 36 pages. Kall limits himself to a few notes on the completeness of the manuscripts, on the arrangement of the biblical books within the Hebrew Bibles and to some statements on corrections and variations of the Small Masorah and the Large Masorah.

Kall’s study does not examine important codicological aspects of the manuscripts, the parchments, the colour and composition of the ink, nor does it concern itself with palaeography, the changes in handwriting or the unique micrographies. Like all biblical scholars who examined the manuscripts after him, Kall approached the Bible manuscripts methodically one-dimensionally with linguistic-philological questions. The exploration of the actual text genesis and the inspection of the socio-cultural environment of the writer, the remitter and the Jewish community in Erfurt at a certain time in the Middle Ages when they were created were not addressed.

A big step forward in historical-critical exegesis was made by a professor for Oriental Languages and Theology in Halle, Johann Heinrich Michaelis, with his edition of the Hebrew Bible which was published in Halle in 1720. Creating his version of the text he drew on not only the Erfurt texts, but also on all the other versions of the Hebrew Bible that were then available to him. His great nephew Johann David Michaelis continued this approach and commissioned his pupil Johann Christian Wilhelm Diederichs with a revision of the critical apparatus of the Halle Bible. Diederichs investigated anew the Erfurt Manuscripts and stated his results in 1775 after a two-year study of the manuscripts in an essay on the interpretations of 83 psalms (especially variants of consonant signs and cantillation signs).

For the sake of completeness the English Hebrew and bible scholar Benjamin Kennicott should be mentioned, who in his study “The Ten Annual Accounts of the Collation of Hebrew MSS of the Old Testament” refers to the Erfurt Bible Manuscripts appreciatory and who expressed his hope “that this Collation will soon be in England“ in order to be studied by him.

At the beginning of the 19th century the Erfurt born Hebrew scholar and theologian Johann Joachim Bellermann summarised the research results of his predecessors in chapters VI–X of his "History of Library and Museum Institutions of Erfurt", for which he was mercilessly accused of plagiarism by Paul de Lagarde who said of him he could not “be clever for any length without I H Michaelis”. As a matter of fact Bellermann’s own contributions in his manuscript descriptions are humble. Noteworthy however is that, apart from the Bible manuscripts, other manuscripts of the collection are concisely described. These include the four Torah scrolls (Erfurt 6–9), the Small Masorah (Erfurt 10) and the Tosefta (Erfurt 12), described as „Thalmud, et quidem ea pars, quae Gemara dicitur“ by Bellermann.

The works of Moses Samuel Zuckermandel and Paul de Lagarde were the high point in research on the Erfurt Manuscript Collection. Zuckermandel was the first to point out the high value of the manuscript “Erfurt 12” in his study on the Erfurt Tosefta published in 1876. He was the one who appreciated the manuscript as an important source of the halakhic works, which only survive in a few, partly fragmentary exemplars. Prior to Zuckermandel’s seminal study the codex had found entry in the catalogues either as the Jerusalem Talmud or Mishnah. Only Zacharias Frankel had previously noted in 1870 in his introduction to the Jerusalem Talmud that this manuscript was a rare example of a Tosefta – however without going into the manuscript any further. Zuckermandel’s work on the Tosefta is – apart from the commented translation of Aesop’s Fables by Julius Landsberger from the manuscript collection “Erfurt 15” – the only comprehensive study of a manuscript from the bundle. The work still is regarded today as a standard work for the research of the text group belonging to the Tosefta.

The cultural philosopher and Orientalist Paul de Lagarde, who is chiefly remembered for being a self-confessed anti-Semite, undertook the last attempt to describe the manuscript collection at the end of the 19th century. In his article “Hebrew Manuscripts in Erfurt” he discusses, apart from the Torah scrolls, all manuscripts of the Erfurt collection and in addition the existing research literature. Lagarde was conscious of the fact that his brief remarks could only be the starting point for further research.

Since the transfer of the “Erfurt Collection” to the Oriental Department of the Royal Library Berlin in 1880 the research endeavours have practically come to an end. Moritz Steinschneider describes the purchase of the bundle of sixteen manuscripts and a minimal amount of palaeographic key data in the shortest possible way in his manuscript catalogue published in 1897. The great codicologist of the 19th century indicated with no word that the medieval manuscripts of the “Erfurt Collection” still belong to the most spectacular of the Berlin collection.

It was only in August 2002 that a renewed engagement with the valuable manuscripts began with the exhibition „Kitwe-Jad. Jewish Manuscripts - Restoring, Preserving, Presenting“ organised by the Berlin State Library. The Israeli manuscript expert Malachi Beit Arie (Hebrew University) and Oliver Hahn from the Federal Institute for Materials Research and Testing launched a research project in which the great Bible manuscript “Erfurt 1” was subjected to a material examination. An in-depth codicological and palaeographical analysis gave a very complex picture of the making of the Hebrew Bible. The elaborate ink analysis by means of X-ray fluorescence confirmed the results and gave further insights into the chronology of the manuscript.

The volume “Erfurt Writings on Jewish History” published in 2012 includes a study by Franz Hubmann and Josef Oesch, in which the authors examine the Torah scrolls and the Bible manuscript “Erfurt 3” in regard to the arrangement of strongly regulated text passages – like Song of the Sea and Song of Moses – and to special characters. By analysing the writing they were able to place the manuscripts both to their geography and in time and interesting findings could be deduced about the transmission of particular conventions in ritual writing.

Despite its extraordinary high cultural value the bundle has been hardly explored up to now apart from these few individual studies.

This will now happen in collaboration with the manuscript expert Dr Annett Martini from the Institute of Jewish Studies at Free University Berlin and the Oriental Department of the Berlin State Library, where the manuscripts are still kept. The aim is to examine the manuscripts for the first time as a whole in their specific cultural-historical context in order to form a clearer picture from the fragments of Jewish life in Erfurt that have been handed down to us. In the process the manuscripts themselves will be studied as socio-cultural sources of their creation and be set in the context of other cultural, architectural and ritual artefacts (like the Treasure, the Old Synagogue, the medieval Jewish cemetery and the immersion bath) from Erfurt’s medieval Jewish community.

The physical aspects of the manuscripts will also be methodically studied. The subject will be approached by asking what can be deduced from the materials of the manuscript themselves. What, for example, does the quality of the parchments say about their place of manufacture, or the ink changes in the text about the writing process, the size of the codices about their purpose and treatment, or the book decorations about the influences of the surrounding culture? In this way fascinating insights into the cultural and social reality of life of Erfurt’s Jews prior to 1349 can be discovered on the one hand. On the other hand the Erfurt Manuscripts hold numerous clues to their reception after 1349 in the form of apostils and comments and so constitute an important testimonial for the early Christian Hebraism and the exploration of Jewish history by the scientific representatives of Judaism.