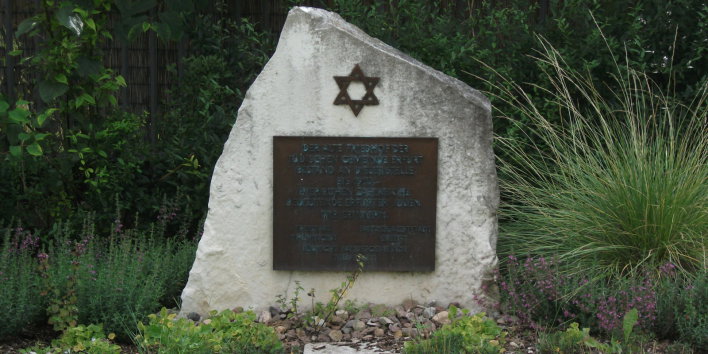 Below the Egapark, between the houses Nos. 3 and 4 Cyriakstraße, is the Old Jewish Cemetery. When a community re-established itself in Erfurt in the 19th century, the first burial site was created here in 1811. As the community rapidly grew the cemetery became too small for further burials. Since the opening of the New Jewish Cemetery in 1878 members of the Jewish community are buried there.

As the Jewish faith demands that the dead rest in peace for eternity, the Old Jewish Cemetery was maintained after its closure. But the peace of the dead was increasingly disturbed with the strengthening of anti-Semitism in the 20th century. Already in 1926, in the night from 12 to 13 March, members of the right-wing organisation “Wikingbund” desecrated the cemetery and destroyed 95 gravestones. In the pogrom night from 9 to 10 November 1938 the cemetery was attacked again. In the meeting of the city council from 17 November 1938 council member Waldemar Heinemann suggested “to raze the old Jew cemetery at Cyriakstraße”. The Jewish community had to cede the cemetery site to the city of Erfurt on 6 April 1939; the gravestones were removed in 1944.

In 1948 the site was returned to the Regional Association of Jewish Communities. Since 1950 however there were already endeavours by the town to purchase the ground in order to turn it into a public green space. In 1951 the Jewish community sold the plot to the city of Erfurt – possibly under pressure. In the early 1960s garages for the cars of the Public Prosecution Service of Bezirk Erfurt (the regional district), whose building also contained broken Jewish gravestones in the foundations, were erected. This was an intolerable situation for observant Jews, as the then chairperson of the Jewish community Mr Scharf-Katz wrote in a letter in 1989. Despite this even in 1995 the construction of an electricity sub-station on the cemetery grounds was authorised. 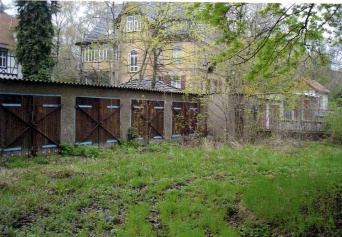 Picture: Situation before the garages were pulled down in 2007

In remembrance of the cemetery to start with a memorial stone was erected in 1996. Since the year 2000 there were discussions to make the cemetery visible again, and the realisation started in 2007: The garages were pulled down and the site cleared. In the redevelopment the cemetery site was separated from the green space. Apart from the memorial stone and a newly erected information pillar the gravestones that had partly been saved and taken to the New Cemetery and were originally from here were returned.