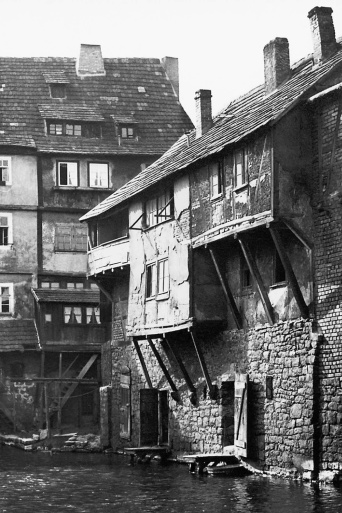 Picture: Until 1945 there stood a terraced row of houses next to the river. In the second house, No. 11 Kreuzgasse, was the mikveh. Picture: © Stadtarchiv Erfurt

Possibly in the 12th century the Jewish community had a mikveh, of which only the south wall is extant today. Abutting this wall a new mikveh was built in the 13th century, which is for the most part preserved today. The building was about 9 metres long and almost 3 metres wide. The walls are of exceptionally good quality. The vault, the upper and undermost part of the walls are lime stone, which are laid in regular courses. The north wall features a light hole. Access to the mikveh was via stairs from the west. The sockets for the steps have been preserved at the north wall.

The water basin is next to the river at the end of the building and stretches over the whole width. There is an interesting variation in the stonework. In the basin area, at the height of the medieval water level, only large sandstone blocks are used, unlike in any other cellar in Erfurt. They probably come from the previous building.

The Christian cemetery, enlarged after 1472, bestrode a part of the former mikveh building. The excavation and documentation of around 80 graves was very time-consuming.

The pogrom of 1349 left distinct marks on the building. The mikveh was evidently massively damaged, like many buildings in the Jewish quarter. A distinct joint is visible in the north wall, which points to repair and rebuilding. The Jewish community, which was formed anew in 1354, used the bath again.

In the second excavation in 2008 the basin area could be cleared. For the duration of the works a pump had to remove the ground water in the basin.

In 2010 a small carving was discovered on a sandstone building block that was reused in the second building phase. It is an exceptionally high-quality worked head of a young, beardless man wearing a crown of lilies. Stylistically this effigy can be dated to the first half of the 12th century. It was reversed when the stone was re-used and hidden under mortar. How it is to be interpreted remains unclear. Just as little is known about where it came from.

After the expulsion of the Jews from Erfurt in 1453 the water basin was filled in and the mikveh converted into a cellar. In 1472 a devastating fire destroyed the appendant house. After that the north and west walls were broken off and in front of the rubble in the western part a partition wall was put in. Thus the room could be continued to be used as a cellar, with a new access via the east wall. From 1495 the cemetery of Benediktikirche was enlarged over the western half of the former mikveh. The house itself survived until the 1940s; in 1960/61 the site was grassed over.

With the unearthing of the mikveh a new piece was added to the jigsaw puzzle for the network “Jewish Life in Erfurt” and the application for the title “Unesco World Cultural Heritage”.

The protective building was constructed in the first half of 2011 by the Weimar architecture firm gildehaus.reich. The mikveh opened as a museum in September 2011. Since then visits of the ritual bath have been possible as part of a guided tour.