The treasure has a total weight of nearly 30 kilogrammes. With around 24 kilogrammes, 3,141 silver coins and 14 silver ingots of different sizes and weight form the biggest part of it. Moreover, the hoard contained over seven hundred individual items of gothic goldsmith's art, some highly accomplished. 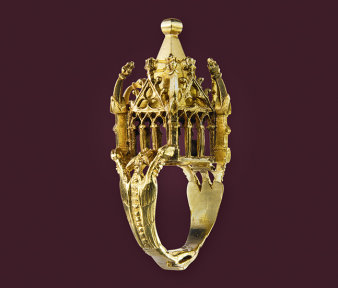 Picture: The Jewish wedding ring is the most important object of the Erfurt Treasure. Picture: © TLDA/Papenfuss Atelier für Gestaltung

Among the eight finger rings of the Erfurt Treasure, a Jewish wedding ring is the most elaborate and also the most remarkable object of the entire hoard. the bulky ring, according to medieval Jewish tradition made of pure gold and without any trimmings of gemstones, was merely worn during the wedding ceremony.

The bottom side of its broad circlet is adorned with the depiction of two interlocked hands, an ancient allegory of marital fidelity. Along its sides, two winged dragons carry the finely worked, gothic temple-like architecture. Engraved in six Hebrew letters on the smooth roof areas is the inscription "masel tov", literally meaning "good star", but figuratively signifying "Good Luck".

As far as it is known to date, there exist only two similar medieval wedding rings of the same kind worldwide. 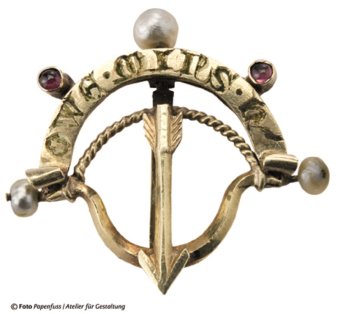 The most splendid pieces of jewellery in the Erfurt treasure are, without doubt, eight brooches of different size and form, partly with abundant ornamentation of precious stones. Three brooches form a group dating from the end of the 13th century, characterised by very similar filigree animal depictions as well as their trimmings of coloured gems and pearls. Another brooch carries bow and arrow as well as a banner with the Middle High German inscription "OWE MINS H(ERZ)" – roughly translated as "Alack my heart".

With more than 600 items, parts of belts and garment trimmings numerically form the biggest part of the treasure. From three clasps and strap ends each as well as silver appliqués, four belts can be reconstructed. Motifs punched from thin sheets of gilded silver served as trimmings, sown to precious garments.

Eleven silver vessels form a grand ensemble of silver tableware. It consists of a double cup, a shallow drinking vessel, one ewer as well as a set of eight nested beakers. Traces of use prove that these vessels were actually used by their former owners. 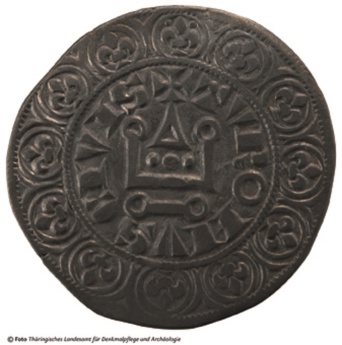 The Erfurt Treasure find is also remarkable from a numismatic point of view, because the coins are one of the first sort that were used further than locally or regionally: The find contains 3,141 tornese coins. These are French Kings’ tornese or accurate imitations bearing the names of the French kings in their circumscriptions. Most of the coins in the Erfurt treasure bear the legend of Louis IX, Philip III, Philip IV or Philip V.

In addition, the find comprises 14 silver ingots, also known as “Gusskönige” in German (the name for a piece of metal when it has been taken out of the cast). Apart from one exception, each exemplar has been given a stamp. Five ingots bear the Mainz wheel, the emblem of the Archbishop of Mainz. Possibly, they were made in the Erfurt mint.