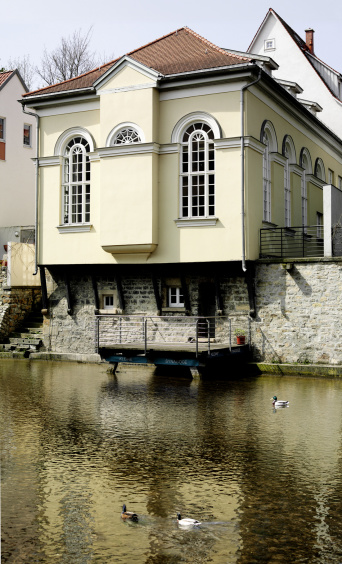 The Small Synagogue was the house of worship of the members of the Jewish community, who were allowed to resettle in Erfurt at the beginning of the 19th century. With the growing community and the building of the Great Synagogue the building was deconsecrated. A meeting centre has been here since 1998.

After the forced expulsion of the Jews from Erfurt in 1453/4 it was only possible for Jews to return to Erfurt at the beginning of the 19th century. Since 1806 the Jewish new settlers used a private residence for communal worship, which was situated at No. 10 Judenschule (later No. 2433; today Nos. 4-5 An der Stadtmünze) and was already mentioned as “Jews’ Prayer House” in 1817. The chairperson of the Jewish community, Dr Ephraim Salomon Unger, bought the house in 1823 and had it developed into a prayer house. But in 1838 the house was closed due to dilapidation and arrangements were made for a new building.

What is known today as the Small Synagogue was solemnly inaugurated on 10 July 1840. A two-storey building in Classical style was built by including the existing cellar, with a hip roof, a prayer hall with Torah shrine, a women’s balcony and residential rooms.

As the community grew the synagogue became too small; therefore the community built the Great Synagogue on Kartäuserring in 1884. The Torah scrolls were carried over to the new synagogue in a ceremonial procession through the town. The former synagogue was sold by the community to the merchant C. C. Römpler who made many changes to the building: On the balcony partition walls for residential rooms were put in as well as a suspended ceiling in the hall. The former synagogue now served as a storage facility for barrels and production building for essences and spirits.

Later the building passed into the possession of the municipality, became a residential building with apartments in 1918 and was used secularly until 1993. Due to the alterations and conversions the former synagogue was no longer discernible as such, which is probably the reason why it escaped destruction by the National Socialists.

Due to the profane use the function and significance of the building were almost completely forgotten. An awareness of the synagogue did not begin to develop in Erfurt until the late 1980s. Building-historical examinations exposed the Torah shrine in the extension sticking out over the course of the river in 1993. The shrine and a door leaf were hidden behind stud walls and ceilings. Fragmentary traces of the paint in the typical contemporary white and beige tones with gilded profiles can still be found on the framing of the Torah shrine. The restorers laid bare a fully preserved Hebrew inscription behind a load-bearing beam above the Torah shrine. Here you can read “Know in front of whom you are standing”.

Research into the building’s history went along with the first plans for its future use. In 1992 the Small Synagogue was listed as a monument, and the Erfurt Council approved a first concept for the establishment of a meeting centre in this extraordinary place.

The restoration of the Small Synagogue that followed aimed to restore the original condition inside and outside as far as possible. Under the planking in the prayer hall the women’s balcony and also the Torah shrine were luckily preserved, so that today the interior space presents itself virtually in its original condition. The opening ceremony for the Small Synagogue meeting centre took place on 9 November 1998. 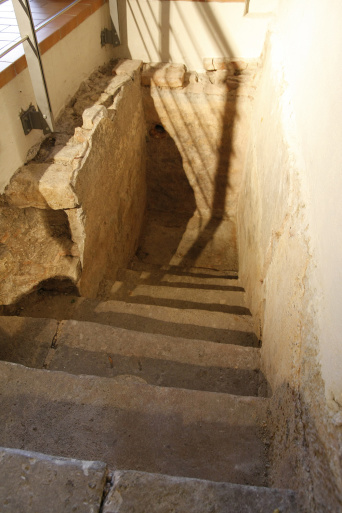 Picture: Access to the former mikveh in the Small Synagogue Picture: © Stadtverwaltung Erfurt

Until the restoration of the Small Synagogue the mikveh in the Small Synagogue was filled in. There is however mention of a “women’s bath” in the building documents of the 19th century, and in the floor plan of the cellar there is a facility with steps marked.

During digging in this area in 1994 the mikveh, stone-built with sandstone, was exposed. Seven steps lead down to the basin, which has a depth of 1.42 metres and a capacity of around 520 litres. In the east wall there are two pipe ducts; there were possibly water pipes leading to the river Gera or to the boiler in the northeast corner. On the original building plans two tanks are visible. One probably served as a reservoir for the pumped water, the other one as a heating boiler – since in the 19th century a certain proportion of hot water was allowed in the mikveh.

Whether the mikveh was built at the time of the construction of the synagogue in 1840 or whether it was already part of the previous building cannot be established today.