The oldest sections of wall in the Old Synagogue date from the late 11th century. Wood from this building phase can be dendrochronologically dated to the year 1094. The ancient uncoursed rubble masonry with recessed pointing can be seen in an 8 metre wide section of the west wall.

As was common in the Middle Ages the original floor lay beneath street level. As a sign of humility one descended a few steps down when entering the house of worship. 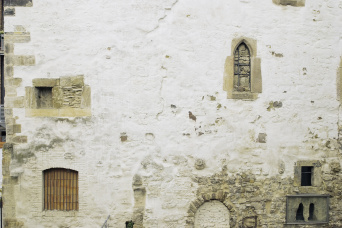 Picture: The un-rendered section of the west facade shows the construction section that has been preserved from the 12th century. The double window is visible on the bottom left in the picture. Picture: © Papenfuss, Atelier für Gestaltung

In the second half of the 12th century the synagogue was rebuilt or renovated. Only a short section of the west wall remains from this building phase. The joints in the stonework are not visible. The only adornment in it is a double window, the biforium, which incorporates a wooden lintel from the first building phase. 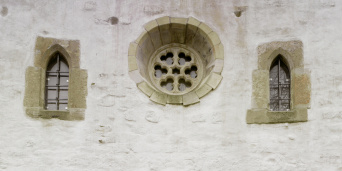 Picture: The west facade of the Old Synagogue was newly fashioned with a rose window around 1270. The picture also shows two of the five lancet windows. Picture: © Papenfuss - Atelier für Gestaltung

Around 1270 a purpose-built new synagogue was constructed, incorporating the older parts of the building. Five lancet windows and one large rose window give distinction to the west facade. A wooden barrel vault, whose original plaster edge survives under the roof of the west wall, spanned the high interior room of the house of worship.

The only visible adornment to the interior room is the lamp cornice, a ledge which runs round the walls to illuminate the synagogue. It is clearly visible on the east side of the room. Here is where most likely the Torah shrine was. It was destroyed during the conversion into a storehouse to make room for a large doorway. The location of the lectern, the bimah, cannot be ascertained due to missing traces on the floor. In medieval times however it usually stood in the middle of the room. Two preserved voussoirs indicate that the bimah was of octagonal shape.

Picture: View of the north facade of the Old Synagogue. The three preserved lancet windows can be seen as well as the bricked-up doorway to the Old Synagogue to the left of today’s entrance. Picture: © Stadtverwaltung Erfurt

Around 1300 the synagogue was extended by a few metres to the north and raised. The extension probably accommodated the women’s synagogue that was traditionally separated from the men’s prayer room, or it served as a school for the boys’ Hebrew lessons. It was partitioned from the actual synagogue room by a large fluted lancet arched screen.

The extension had a symmetrically structured facade to the north. Originally the entrance to the synagogue was in the middle of the north wall. Over the preserved gate there were five high lancet windows, only three of which however survive: During the conversion of the synagogue into a storehouse after the pogrom of 1349, the windows were minimised in order to integrate storage floors by using the old jambs and arches.

After the devastating pogrom of 1349, during which the synagogue was badly damaged, the city of Erfurt acquired the building. It was sold to a trader who already owned No. 2 Michaelisstraße, the easterly adjoining plot. During profanation of the synagogue he converted the house of worship into a storehouse by constructing a large vaulted cellar under the building and erecting new roof trusses. Two massive wooden floors, whose beams can be dendrochronologically dated to the year 1350, were inserted. In order to get carts from the front building in Michaelisstraße to the storehouse and on to Waagegasse, two large doorways were broken into the east and north wall. The building was used as a storehouse for the next 500 years and hardly changed. This is evidenced today by grains and husks, which can be seen behind the new glass panes of the lancet windows in the west facade. 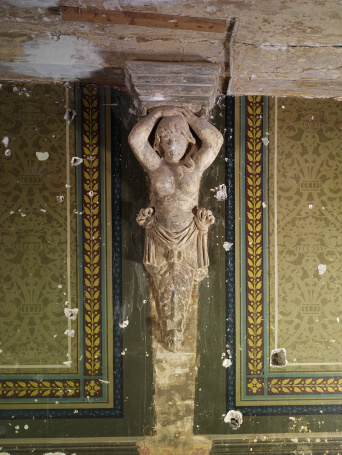 Picture: Stucco figures, ornamental painting and circular gallery on the first floor still testify today to the former use as a ballroom.

A dining and dance venue

From the late 19th century the former synagogue was used for worldly pleasures: A ballroom was installed on the first floor, whose rich décor with stucco figures and coloured painting is largely preserved. For this the top-floor ceiling of the storehouse was taken out and replaced by a circular gallery. On the ground floor there was a kitchen and later a dining area. There were also two skittle alleys in the cellar and on the ground floor. The building was used as a restaurant until the beginning of the restoration works.

After 1990: Discovery and salvage

Due to the many conversions, extensions and additions, the original form of the synagogue was barely discernible for a long time. It was not until the late 1980s that the existing substance was documented and assessed by the Independent Institute for Building Research and Documentation (Freies Institut für Bauforschung und Dokumentation). From 1992 building surveys by the Independent Institute for Building Research and Documentation took place the under the direction of Elmar Altwasser. It was found that the Old Synagogue was largely intact and of particular constructional quality. However, caused by the use as storehouse and ballroom as well as decades-long neglect, there was an acute danger of collapse. The new owner, who had acquired the synagogue together with the whole group of buildings in 1990 from the TLG (Treuhand Liegenschaftsgesellschaft, the State real estate company dealing with property after the fall of the Wall) and who wanted to install a large restaurant with a brewery, did not make any effort to restore the building. Because of its uniqueness that was slowly being discovered the city of Erfurt endeavoured to save the synagogue and find an appropriate use for it. After lengthy negotiations it was bought by the city in 1998.

The special history of the Old Synagogue called for a special restoration. It was decided to preserve the traces of the different uses, which reflect the history of Erfurt’s Jewish community. In order to make the synagogue visible from the outside, numerous annexes were removed.

On the question of the future use of the Old Synagogue a captivating idea took form, which was worked on from 2003: the establishment of a museum of the culture and the history of Erfurt’s Jewish community in medieval times. The Museum Old Synagogue Erfurt was opened on 27 October 2009.

Animation film on the building history of the Old Synagogue