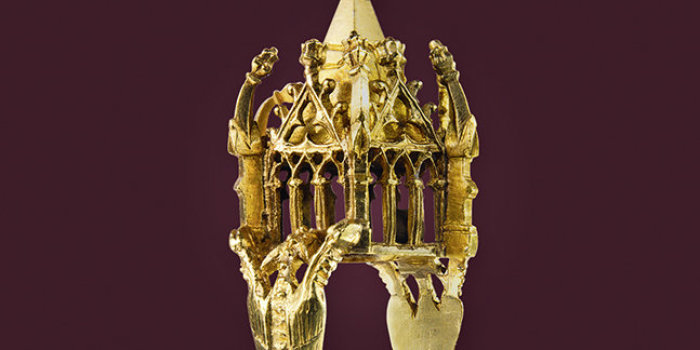 The historic monument Old Synagogue as the most important exhibit also presents the Erfurt Treasure and engages with the Erfurt Hebrew Manuscripts. 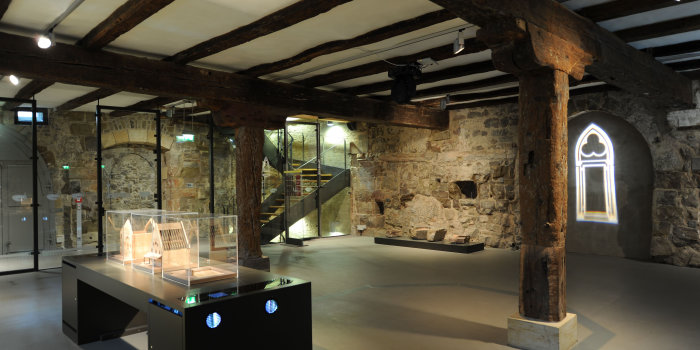 The ground floor exhibits tell the story the Old Synagogue building and its usage. The focal point is the building itself; it is the most important exhibit. The building and usage history of the Synagogue reflects at the same time the development of Erfurt’s Jewish community.

On the ground floor of the museum the original fittings of the synagogue room are the centre of attention: A lamp cornice running around the walls is still visible and has been reinstated in places. The bimah, the lectern, can be reconstructed with the help of fragments used elsewhere. A projection shows an impression of the Torah shrine, which was most probably destroyed during the profanation of the Synagogue. A glass wall indicates the partition of the room into the men’s and the women’s prayer hall.
Three models visualise the building phases of the Synagogue. Two maps show the situation in the surrounds of the Synagogue prior to the pogrom of 1349 and the changes after this caesura.

Developed under Archbishop Konrad I in the last third of the 12th century, the "Erfurt Jewish Oath" is held to be the oldest extant Jewish oath in the German language today.

In the cellar of the Old Synagogue the so-called Erfurt Treasure is exhibited, which was in all likelihood buried during the pogrom of 1349 – a unique find in volume and composition. This treasure was discovered in 1998 after archaeological examinations in the immediate neighbourhood of the synagogue on the plot of Nos. 43/44 Michaelisstraße. It was buried under the wall of a cellar entrance.
The treasure has a total weight of about 28 kilogrammes. The largest part of it in terms of numbers of pieces are 3,141 silver coins as well as 14 silver bars of different sizes and weights. Necessarily the silver predominates, since this metal (be it as coin or bar) was the most important means of payment in trade, in effect the common currency of the Middle Ages.

Furthermore the find contained more than 700 individual pieces of Gothic goldsmith’s art, some of it superbly executed. The outstanding piece is a golden Jewish wedding ring from the early 14th century, which is the sole occupant of a showcase in the middle of the exhibition room.

In addition to this an ensemble of silver tableware, which is composed of a set of eight goblets, a jug, a drinking vessel and a so-called double head (a double vessel consisting of two cups which can fit into one another so that one forms the lid for the other) was part of the find.

Of the pieces of jewellery special mention should be given to eight brooches of different size and form which are in parts richly studded with precious stones, as well as seven further rings made of gold and silver. Belt sections and clothing decorations represent the numerically largest share of the goldsmith’s works.

On the upper floor you can see facsimiles of medieval manuscripts, which testify to the active intellectual life of the Erfurt community.

The Berlin State Library – Prussian Cultural Heritage is the owner of a bundle of Hebrew manuscripts, which originate from Erfurt and were produced in the 13th and 14th centuries. After 1349 the manuscripts ended up in the hands of the Erfurt Council and were later kept in the Augustinian Monastery. From there they were sold to the Royal Library in Berlin. Amongst them are a number of outstanding manuscripts: The largest known medieval Torah hails from Erfurt. The “Bible Erfurt 1” consists of two volumes, each weighing 50 kg, and makes the claim to be the largest existing Hebrew parchment Bible manuscript. The original binding of the second volume of this Bible is part of the exhibition.