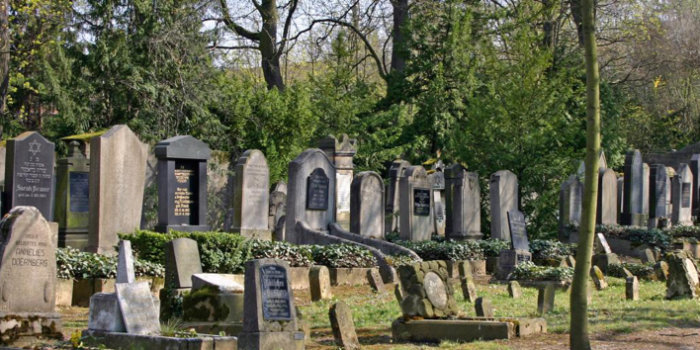 The community that established itself in Erfurt at the beginning of the 19th century buried their dead at first in the Old Jewish Cemetery in Cyriakstraße. Given that the peace of the dead is eternal in Jewish faith, graves are, unlike Christian burial plots in Germany, not re-used after a certain number of years. This and the rapid growth of Erfurt’s Jewish community in the 19th century meant the cemetery became too small for further burials. An expansion was not possible in the confines of the growing city.

In consultation with the city of Erfurt the Jewish community therefore looked for a new site, which could be purchased for burial purposes. The suggestion to use a part of the South Cemetery and construct their own Jewish graveyard there was considered. But the area proved to be too small in view of the single occupancy and the eternal peace of the grave.

In the south of the city, near today’s Thüringenhalle, a suitable site was found in 1871, which was large enough to fulfil all requirements. Yet the community met resistance when creating the cemetery: The owner of the neighbouring plot, the Citizens Shooting Corps, complained to the Magistrate of the city of Erfurt, suggesting that the cemetery may be harmful to the health of its members. The objection of the Citizens Shooting Corps showed anti-Semitic tones, but this was not an isolated case in Erfurt. After long negotiations and an approval certificate by the sanitary police, which stated that no groundwater contamination needed to be feared, the New Jewish Cemetery could be constructed. 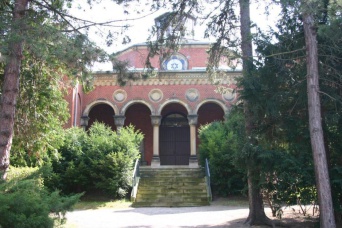 It was inaugurated on 10 September 1878. An official representative of the magistrate was present. Prior to the event there was a sudden death, and in order to be able to undertake the burial, the opening of the cemetery was advanced without further ado. Since then the deceased of the Jewish community find their eternal peace here.

The New Jewish Cemetery in Erfurt is the only one actively used in Thuringia. It accommodates gravestones from the 19th century until today. In 1894 the community constructed a mortuary in the cemetery, which can still be seen. Here the washing of the corpses is carried out: After the actual washing of the deceased the body is subjected to ritual washing, the tahara: Water is poured repeatedly over the body whilst various verses from the psalms and from the Song of Songs are spoken. Afterwards the corpse is dressed in a white, plain death robe.

The architect of the mortuary was master-builder Hugo Hirsch. He created a functionally appropriate building in oriental style with Neo-classical elements.