In the cellar of the Old Synagogue, the so-called Erfurt Treasure is exhibited. It was discovered by archaeologists in 1998 during building works in Nos. 43/44 Michaelisstraße, not far from the synagogue. It was most likely a Jewish merchant who buried the treasure before the pogrom of 1349. 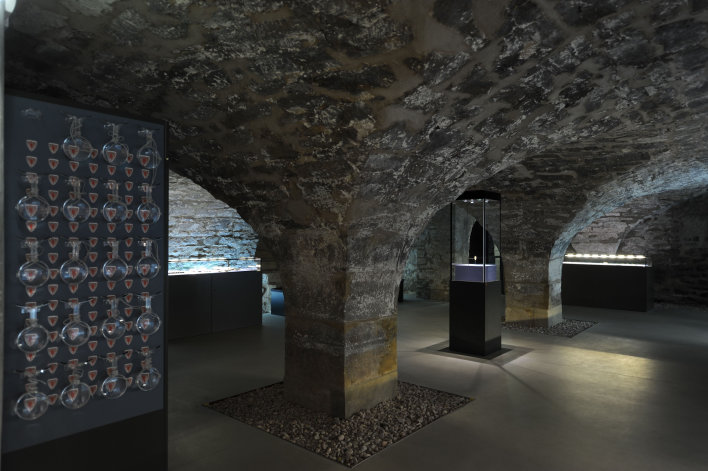 Picture: The Erfurt Treasure is exhibited in the cellar of the Museum Old Synagogue. Picture: © Büro Albrecht von Kirchbach

The Erfurt Treasure was very likely hidden before the pogrom of 21 March, 1349: On this day, the wave of persecutions of the Jewish population correlating to the outbreak of the plague in Southern Germany and spreading north from there, reached Erfurt. Debt overload, hate of people of a different faith and professional jealousy among tradesmen were the reasons; like elsewhere, a welcome pretext was the accusation that the Jews had poisoned the wells.

During the riots, the quarter around the synagogue burned down; the entire Jewish community perished. With approximately 1,000 members and distinguished scholars, it had been among the most prominent communities of its time. The Jewish money lender Kalman von Wiehe has been identified as the last owner of the plot of land and can thus be considered as former owner of the treasure.

After special exhibitions in Speyer, Berlin, Paris, London and New York, the Erfurt Treasure has found its permanent exhibition venue in the cellar of the Old Synagogue.