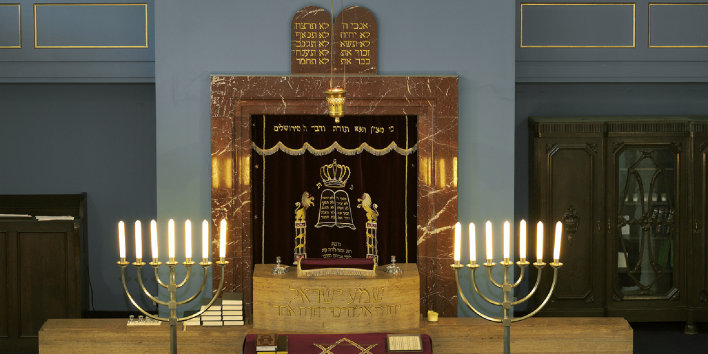 As the Jewish community Erfurt grew again after the end of the Second World War, the board of the synagogue community requested from the city of Erfurt the restitution of the site on which the Great Synagogue had stood until 1938. By decision of the city council of 20 March 1947 the community retrieved the land and then began working on the plans for constructing a new synagogue.

The first proposal drawn up by the architect Willy Nöckel in 1948 was rejected in 1950 with the reason that the building with a round prayer room would not fit in with the urbanistic setting; it was deemed “too large” and “too ecclesiastical”. It was only a third set of plans by the architect in 1951, which addressed these reservations, that was approved by the city. The less high and unostentatious building was inaugurated on 31 August 1952.

The Erfurt Synagogue remained the only new building exclusively used as a synagogue after the Second World War in the GDR. In the course of the dynamic political changes in the early 1990s many people of Jewish faith left the crumbling Soviet Union. Since 1991 they and people with Jewish ancestors living in the successor states of the Soviet Union had the possibility to enter Germany as quota refugees; several hundred found a new home in Erfurt.

The New Synagogue is thus once again at the heart of a lively community. Here, amongst other things, the weekly Shabbat services are celebrated, which are also open to non-Jewish visitors.

Times of worship in the New Synagogue Erfurt