Only Member States of Unesco may put forward a proposal for inclusion into the World Heritage List. As applying for World Heritage is very popular, especially in Europe, states are encouraged by Unesco to keep a list of potential World Heritage Sites on their territory processed over a period of several years (so-called Tentative Lists).
In Germany, the Tentative List is kept in a determined order by the Standing Conference of the Ministers of Education and Cultural Affairs of the Länder in the Federal Republic of Germany (KMK). This means that the sixteen German Länder agree among each other which site may put forward its application to Unesco in which year. As Germany already has plenty World Heritage Sites it can only put forward one cultural and one natural heritage site per year. 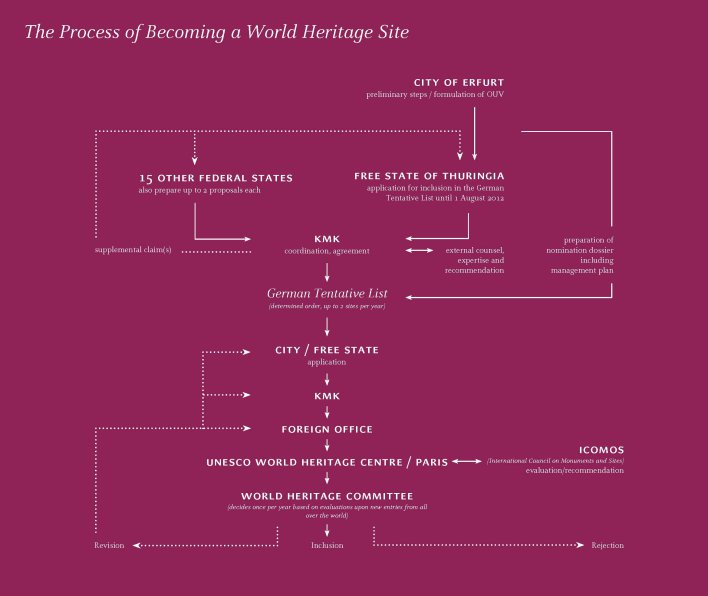 The nomination dossier, compiled while waiting for the deadline, should be as exhaustive as possible. In addition to detailed documentation of the proposed site and its historical significance, it particularly has to contain the statement of "Outstanding Universal Value" – the explanation why this specific site should become part of Unesco World Heritage.
Moreover, a so-called management plan is an essential part of the nomination. It comprises the exact boundaries of the proposed World Heritage Site and a so-called "buffer zone", protecting the site from external interferences, not least visual ones; furthermore, it includes legal protection frameworks, the site's embedding within urban planning and development plans, the institutions responsible for running and preserving the site, public access regulations, educational approaches to conveying the historical background of the specific site as well as the idea of World Heritage in general, but also long-term strategies for the preservation of the site to future generations.

When time has arrived to submit the application to Unesco (in the case of Germany this is done by the Department for Foreign Affairs), the staff at World Heritage Centre in Paris will firstly check the dossier for accuracy and completeness. Only then is it forwarded to a specifically assembled group of experts who will evaluate the proposed site on the basis of their professional knowledge and who will also visit the site personally. They then sum up an expertise, justifying why the application should be accepted, rejected or revised and supplemented by further documentation. For cultural heritage sites, this evaluation is carried out by members of Icomos, the International Council on Monuments and Sites.
At its annual meeting, the World Heritage Committee decides on the inclusion of new sites to the World Heritage List.

More on the Web