From the range of few preserved Jewish ritual buildings from the Middle Ages, the Old Synagogue stands out as one of the largest and best preserved prayer rooms in Central Europe. 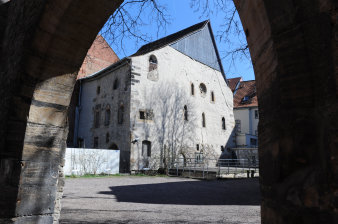 Zoom Picture: View of the Northern and Western facades of the Old Synagogue Picture: © A. v. Kirchbach

Comparably old buildings have either been destroyed and rebuilt or are preserved to a much lesser extent. Sites representing this early height of Jewish life in Central Europe are currently not listed as World Heritage. To date, even younger synagogues, which have been preserved slightly more often, are either not at all represented on the World Heritage List or merely so as part of a historic Old Town.

The Old Synagogue's quality and state of conservation are exceptional, especially in comparison to other preserved synagogues of a similar age. Its architectural history mirrors in a distinct manner the story of a Jewish community and its highly charged relations to its Christian surroundings. Beginning in the 11th century the Jewish community increased and flourished until the riots and persecution, which culminated in its complete extinction during the pogrom of 21 March 1349.

At the same time, general developments in Jewish sacred architecture between the 11th and 14th century can be understood.

Due to conversions and alterations of the 19th century when the synagogue housed a restaurant and a ballroom, its original design was hardly recognizable for a long time. Hence, it was virtually unknown to general perception and thus remained intact during the Third Reich.

The Old Synagogue's architectural history reflects all building phases and its various uses from its time of construction up to subsequent conversions and latest changes to the building in the 19  th   century. Most parts of the building, however, date from the construction phases in the 13t h  and 14th century when the edifice was used as a synagogue.