The mikveh, excavated between 2007-10 in the immediate historic city centre, belongs to the range of early medieval Jewish ritual baths in Europe. 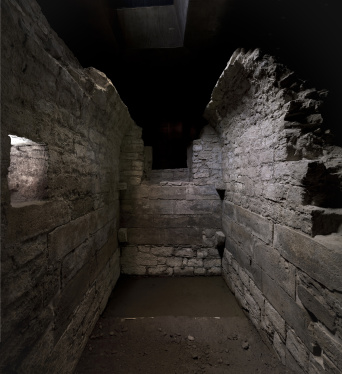 Its main construction phase is to be dated to the mid-13th century; one older building phase is traceable.
The building's shape is unusual and so far unequalled.

Owing to its size and quality, the Erfurt Mikveh can be classified as a monumental mikveh similarly to the so-called shaft mikvaot preserved for instance in Cologne, Speyer, Worms and Friedberg (Hesse).
Unlike these, however, it represents an entirely different and so far singular type of medieval Jewish ritual bath.

The Mainz "Heberolle" of 1248/49 is the first to mention the mikveh in Erfurt; in the interest rate registers of St. Severus Church it can be traced back as far as around 1250. The Jewish community is named there as the owner of the plot of land on Krautgasse (immediately north of Merchants' Bridge), on which the Cold Bath ("Frigido balneo") was located.

The mikveh's walls are of extraordinary quality. The building, about 9 metres long and just under 3 metres wide on the inside, features an alcove in its northern wall, presumably used for depositing clothes.

The basin was reached by a staircase whose course can still be retraced by the former stairs' imprints on the northern wall. According to instructions, the bath was supplied with groundwater, which was constantly available due to the river Gera close by. The stairs permitted complete immersion at all times, seasonal fluctuations were thus easily counterbalanced.

After having concluded the excavation works, the erection of a protective building began, defending the remains of the medieval mikveh from external influences on the one hand and enabling its exhibition on the other. Since September 2011, the mikveh is accessible to visitors within guided tours.