In a complex of buildings on Benediktsplatz 1 in the historic city centre, a medieval stone building is located. Exceptionally numerous essential structures from its time of construction around 1250 have been preserved. 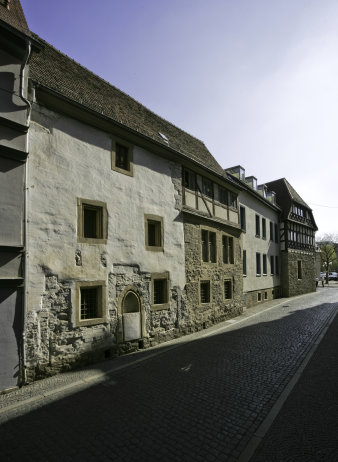 These comprise the portals to both main storeys, the beamed storey ceiling, the original stepped gable as well as the wooden roof structure.

Unique throughout Europe is the upper storey's room interior with a lancet arched vented lighting niche, hardly changed outer walls with scored joints as well as a painted beam ceiling whose beams have been dated to 1241/42.

The boards of the ceiling are consistently decorated with a wheel motif, while each of the beams features different ornamentation.

The Stone House is an exceptional testimony of late medieval secular building culture which can be related to Jewish owners from the end of the 13th century at the latest. As such, it complements the ritual buildings  of the Old Synagogue and the mikveh and forms another important part of the Erfurt Unesco application.